Application Engineers are here to help answer your questions about distributed sensing technology.

"I have been using Sensuron products since 2014 and am extremely satisfied with their service as well as the superior performance of their products."

"I have been using Sensuron products since 2014 and am extremely satisfied with their service as well as the superior performance of their products."
https://www.sensuron.com/testimonials/shell-international/
"Sensuron’s cutting-edge distributed sensing technology pushes the envelope for accuracy in solving real-world problems that, in some instances, is unachievable by any other technology."

"Sensuron’s cutting-edge distributed sensing technology pushes the envelope for accuracy in solving real-world problems that, in some instances, is unachievable by any other technology."
https://www.sensuron.com/testimonials/nasa/
"A single fiber allows us to replace thousands of strain gauges, saving us significant man-hours of effort on a single project and providing us with new insight we would not have gotten by using legacy sensing technology."

"A single fiber allows us to replace thousands of strain gauges, saving us significant man-hours of effort on a single project and providing us with new insight we would not have gotten by using legacy sensing technology."
https://www.sensuron.com/testimonials/northrop-grumman/
Go to Link

For the last decade, AFRC has utilized FOS technology to perform distributed strain sensing and real time structural health monitoring during flight. Compared to traditional sensors, FOS technology provides an unprecedented level of insight into the behavior of a structure: a single hair-like optical fiber spanning up to 40 feet can act similarly to 2,000 or more strain gauges without the cumbersome and weight prohibitive instrumentation wire. In addition to strain, FOS can be used to measure temperature, deflection, stress, load, stiffness, and various other critical engineering parameters.

Both the top and bottom of the X-56A wing surfaces received fiber applications. (Image courtesy: Sensuron)

Engineers installed a two-line fiber system on both the top and bottom wing surfaces of the X-56A to simultaneously monitor the bending and cross-sectional rotations of each wing. The distributed strain data was acquired along the wingspan and used to derive the oscillation velocity of the wings which is indicative of flutter onset. As each fiber line is comprised of hundreds of sensing points, the FOS setup provided significantly more data and greater insight than traditional sensors.

Over the course of testing, the largest deflections occurred at the wing tips and the largest bending strains occur a few feet outboard the wing root. Historically, obtaining this level of insight into the overall strain distribution was only possible computationally through finite element models (FEM). Using FOS, finite element-like data is acquired experimentally on the actual structure. This allows critical areas to be confidently identified instead of just predicted, as well as serving as thorough FEM validation.

A histogram of bending strain and deflection data acquired through the leading-edge fibers over the duration of the FOS test flight. The x-axis corresponds to the sensor number corresponding to a discrete location along the leading-edge fiber on the. The color indicates frequency of that level in the data, where pink is the mean over time and blue is less frequent. (Image courtesy: Sensuron)

A repackaged version of Sensuron LLC’s RTS125+ real-time FOS interrogator flew onboard the X-56A to acquire the strain and deflection data. Considering the specific operating environment, the RTS125+ system’s size and weight was modified – while still offering a level of ruggedization – to ensure optimal performance throughout the mission. 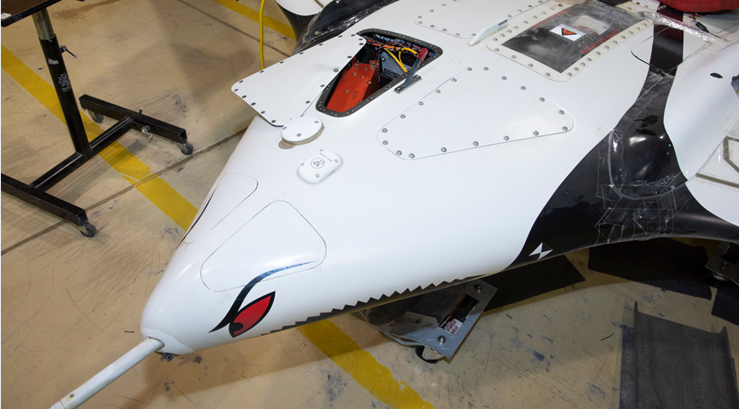 A repackaged version of the RTS125+ FOS interrogator flew onboard X-56 to acquire the FOS data. The overall weight of the interrogator (orange chassis) was reduced from 13 pounds to 6.7 pounds. (Image courtesy: Sensuron)

Sensuron’s RTS125+ acquires continuous strain and temperature distributions on up to 320 feet of small, virtually weightless, and long-lasting fiber optic cable. Optimized for flight applications at AFRC, this technology provides test and instrumentation engineers a new level of insight into the strain distributions, fatigue life, and in-operation performance of aerospace structures.

In addition to real-time, in-flight structural health monitoring, there are a multitude of applications within the aerospace industry where FOS technology is being utilized, including the subcomponent level through full-scale structural testing, crack detection, composites embedment and cure monitoring, finite element validation, flight loads monitoring, and many more. For applications that necessitate the use of hundreds or even thousands of electric strain gauges, a significant reduction in installation time, weight, and complexity is realized by switching to distributed FOS technology.

Ryan Scurlock is an application engineer at Sensuron. He holds a Bachelor of Science in Mechanical Engineering from San Diego State University and a Master of Science in Engineering Mechanics from the University of Texas at Austin. Before joining Sensuron, he held several research positions and served as structural engineer for a worldwide defense technology provider.

You can find out more about which cookies we are using or switch them off in settings.

This website uses cookies so that we can provide you with the best user experience possible. Cookie information is stored in your browser and performs functions such as recognising you when you return to our website and helping our team to understand which sections of the website you find most interesting and useful.

Strictly Necessary Cookie should be enabled at all times so that we can save your preferences for cookie settings.

If you disable this cookie, we will not be able to save your preferences. This means that every time you visit this website you will need to enable or disable cookies again.